What Can I Do with IMPLAN?

Decision makers and business leaders are constantly looking for new ways to make their organizations smarter. Economic insight is key to achieving financial goals. IMPLAN has the technology you need in order to unlock economic opportunity.

So, what is IMPLAN? IMPLAN is a platform that combines a set of extensive databases, economic factors, multipliers, and demographic statistics with a highly refined, customizable modeling system. Together, our application and robust data allows you to:

IMPLAN data is aggregated from multiple sources and is compiled into a  546-sector scheme and framework. The data sources include the Bureau of Labor Statistics, U.S. Census Bureau, Bureau of Economic Analysis, and more. Non-disclosures exist within these data sources, so our team fills in the gaps left by non-disclosures. Beyond reconciling data sources and filling in for non-disclosures, we add additional value by estimating finer geographic scales—calculating more granular data based on what is existing—and providing inter-county trade flow data.

The data and platform have the ability to perform a number of detailed analyses and provide solutions to an ever-increasing amount of questions. How can IMPLAN provide economic insight for you? Start with a question that you want answered. 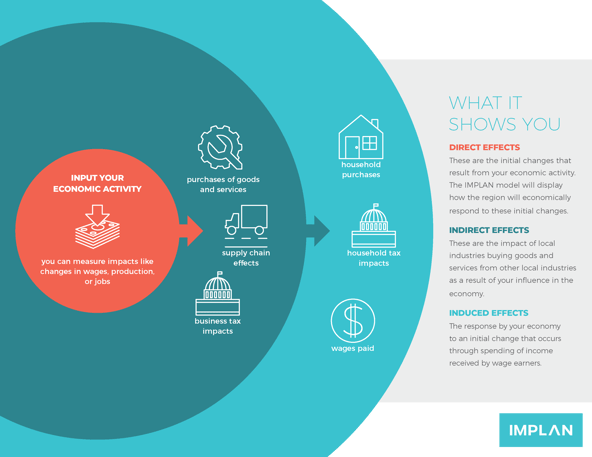 What is my corporate economic footprint?

The impact that your business has on your economy extends well beyond employment numbers and wages paid. Your business supports many other businesses both through your activity and employee spending. IMPLAN allows for users to determine exactly what industries are supported by your business.

A contribution analysis—which estimates the value of a sector or group of sectors in a region—captures these impacts effectively. This method is employed frequently by businesses, trade associations, and the like. A study demonstrating the positive impacts of an industry (in this case on a national scale) can be found in the report prepared by IQVIA for the The American Medical Association of Chicago, IL entitled the “National Economic Impact of Physicians.” Their analysis of the impact of physicians across the nation boasts such impressive figures as “in aggregate across all states, physicians generated $821.6B in direct output in 2015” and that “the number of jobs directly created by patient care physicians (including the number of physicians themselves) was 3,545,399.”

This style of analysis was also run by economists at Cornell University for the New York Apple Association in order to calculate the economic contribution of the apple industry in New York state. In preparing this study, the researchers defined custom sectors and applied detailed spending data to ensure the economic portrait was accurate and representative. What they found was a $2.1B economic footprint in the state for apple production, and for every $1 of output in New York State, $0.81 is contributed to non-apple industries. They also identified the individual sectors which represented the greatest economic multipliers (eg. for every dollar spent in the economy an additional $0.25 of economic activity is generated locally, implying a Multiplier of 1.25).

What would a new industry in my area do to my economy?

Business growth, especially the emergence of a new industry, is highly touted by civic leaders, economic development groups, and business stakeholders. However, quantifying actual employment impacts and economic benefits takes this a step further. There are many questions that need to be considered, such as: Will all spending be new or will some be drawn away from existing business? Will other neighboring areas be impacted by the move? What about the construction phase? The answers to these questions can be found using IMPLAN.

Johnson Economics, LLC conducted an analysis on behalf of ConAm Properties, LLC to assess “the supply and demand of lands appropriate for new Class A office development in West Linn, Oregon.” The study breaks down the topography of the land, the reasons it is better suited for residential rather than commercial development, and the kicker, discusses the potential positive impacts at the site including tax revenue generation, school impacts, and employment and economic impacts. Using economic impact analysis, ConAm Properties, LLC determined that the proposed project would generate an estimated $572,500 in property taxes per year, contribute positive “revenue impacts on local schools”, and support up to 170 jobs during construction.

GE Aviation announced in 2018 that they would be expanding two plants in North Carolina and creating 144 new jobs in the process. A plant of this size undoubtedly has ripple effects beyond the local economy because of where materials are sourced and where these employees spend their money. In this scenario, a Multi-Regional Input-Output Analysis (MRIO) was appropriate for modeling the impact outside of North Carolina. Interestingly, this analysis found that the greatest impact of the plant expansion outside of North Carolina was actually in Florida.

What industries provide the greatest impact on my economy?

On a surface level, determining what important industries are in a given area is straightforward. A simple Google search of the largest companies in a locale will deliver results, but the economic impact is defined by much more than the sheer size of an industry. IMPLAN allows for users to account for all other industries which are affected by economic activity as well and distill what percentage of GDP can be attributed to a given industry in an area. Additionally, it accounts for employee spending and tax considerations.

This data is on full display by the Alliance of Automobile Manufacturers. The automobile industry consists of many sectors, ranging from sales and servicing to manufacturing. The Auto Alliance determined that auto manufacturing infuses $953B into the American economy annually. They utilize IMPLAN data in order to calculate the impacts down to the individual state level. In Alabama, for example, the auto industry constitutes 5.1% of the state’s workforce and represents $7.15B in labor income. It also contributes $1.06B in state tax revenue, which accounts for 10% of tax revenue.

On the flip side, IMPLAN is also effective at demonstrating the economic value that can be lost due to the departure of an industry. This is exemplified in 2002 study completed by Angela Holden at University of MIssouri-St. Louis of the impact of the proposed closure of the Hazelwood Ford Plant in the St. Louis metro area. At the time, a proposed plant closure (ultimately shutting down in 2008) was going to result in the loss of 2,500 manufacturing jobs. An IMPLAN analysis determined that this would result in a total loss of approximately 11,377 jobs and $543 million in labor income in the St. Louis area. The non-auto industries most adversely affected included wholesale trade, banking, real estate, and medical care. The potential losses rippled throughout the community.

Local economic changes are often reported in terms of jobs gained and lost, however direct employment numbers don’t provide a complete portrait. IMPLAN has been the trusted source for public and private entities to capture their economic impact, and in-turn, assess their value to a region in order to guide strategic decision-making and communicate with their stakeholders.

What effect can tourism have on my economy?

Tourism dollars represent a great opportunity for the infusion of outside spending into a local economy. Investing resources in tourist attractions and events has the ability to generate greater outside spending and benefits for residents, as well. IMPLAN is tailor-made to pair with your own collected data to host tourism impact studies and analyses

Travel and tourism is an economic driver for many states and regions. The University of Indiana, historic districts, Monroe Lake, and the Charles C. Deam Wilderness Area draw notable tourist interest in Monroe County, Indiana. Rockport Analytics examined the impact tourist activities have on Monroe County’s economy. Their analysis of $400 million in tourist spending resulted in a total economic impact of $253.2 million. The tourism industry employs 5,322 jobs directly and supports an additional 1,326 upstream jobs. Tourist activities generate sizable tax revenue at the federal, state, and local levels as well.

Baltimore’s Inner Harbor was once an economic hub for the shipping industry, but in the 1950s, as shipping traffic dried up, the harbor, and surrounding area fell into decay. The area was then revitalized with office buildings, restaurants, hotels, and shopping. However, long-term preservation plans were not considered and over time economic issues returned as a result of little updating and poor upkeep. Therefore, the Waterfront Partnership and Maryland Economic Development Corporation were interested in calculating the impact that tourism dollars could have within Baltimore’s economy if deliberate efforts were taken to improve the tourist experience. A tourism impact study was completed on their behalf by HR&A Advisors found that 25 million visitors a year generated $2.3 billion in economic activity. This information validated the value the Inner Harbor provides to the area, and led to a new set of revitalization project proposals. The process followed by HR&A Advisors lead to buy-in from local decision makers and a lead to positive community outcomes. Their study is a model for how tourism impact data can create meaningful economic decisions.

Tourism can be an economic driver for many regions. Economic developers and tourism boards have used IMPLAN to define the economic opportunity their work generates and parlayed that into smarter, strategic decision-making from all stakeholders.

What else can I analyze?

The select handful of examples outlined above merely scratch the surface of the possible analyses you can run in IMPLAN. There are countless questions that are answered by IMPLAN studies every year. Users are constantly finding new and unique ways in which to translate the insight they gain into real-world solutions and action. Economic studies help inform initiatives taken anywhere from small businesses to Amazon to the Federal government. Capturing your contribution, quantifying your economic impact, and communicating your value is accelerated by having the best-available data and a user-friendly application. You have questions—IMPLAN has answers.