Miami is expecting an economic impact of $854 million from a major event this February, but the source of that economic boom may surprise you. For the last 79 years, the Miami International Boat Show has welcomed boating enthusiasts from around the world for an annual exhibition of watersport technology, products, and recreation. According to a recent study, the economic impact felt in South Florida nearly doubles the contribution expected from the Super Bowl 54.

An article from Bill Yeagin, the President and CEO of Correct Craft, in the South Florida Sun Sentinel highlights the boat show’s massive annual impact. Figures were calculated in a study completed by Thomas J. Murray & Associates along with the University of Florida. The Miami International Boat Show fills more than 100,00 hotel rooms for the event. These visitors then spend $53 million in South Florida during their stay. The event analysis performed using IMPLAN demonstrated a $854.2 million statewide economic impact. The show supports 5,700 jobs and $289 million in labor income in the Sunshine State. Exhibitors sell $350 million worth of marine products at the show each year which contributes to Florida’s reputation as the top state for boating in the U.S. 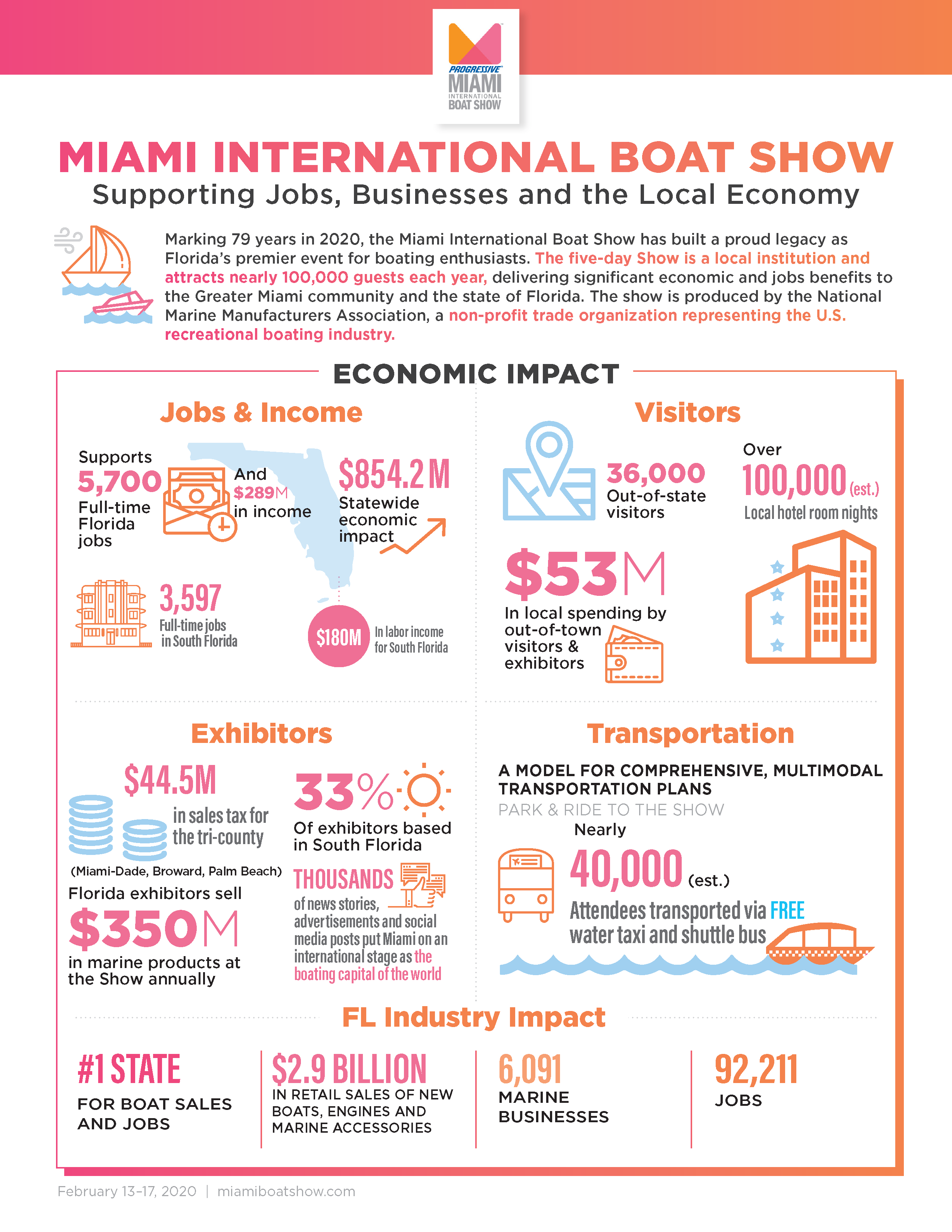 Florida is home to 26% of all boat manufacturers in the U.S. The Miami International Boat Show highlights the boat manufacturers’ notable economic presence within Florida, and a dive into IMPLAN data reveals just how important the boating industry is to the state’s economy. According to 2018 IMPLAN CEW data, 285 boat builders call the Sunshine State home and employ 9,556 people. Through their supply chain expenditures and employee household spending, these businesses support 21,844 total jobs (direct, indirect, and induced). A look at Congressional districts in the U.S. with the most boat manufacturing jobs reveals that 3 Florida districts are among the top 7 (FL-6, FL-9, and FL-10). These watercraft producers also support $134 million in state and local tax revenue annually.

The Miami International Boat Show produces a $854 million economic impact and generates $53 million in visitor spending. Studies anticipated that the 100,000+ visitors for the Super Bowl would generate between a $400-500 million economic impact. While attention was focused on Miami for a week in February due to Super Bowl 54, the impact of the annual Miami International Boat Show nearly doubled that of “The Big Game.” The boat show impact coupled with the size of the maritime industry clearly demonstrates that boating is worth boatloads to the economy of Florida.