Quantify Your Economic Impact in Any Congressional District

When conducting any economic impact study, defining where an impact is felt is critical. Whether analyzing the nationwide impact of an industry or the contribution that business makes in a specific zip code, IMPLAN’s economic data and modeling provide the insight you are seeking. Data is available for all geographic regions across the U.S. including all 435 congressional districts. This means that economic impact analyses can be run in any congressional district nationwide. Advocacy groups and leaders are utilizing this data to bolster their advocacy efforts, communicate their value to elected officials, and influence legislation.

On December 31, 2018, the Modern Fish Act, which officially established differences between recreational and commercial fishing and provided improved management tools for recreational fishing, was signed into law. The legislation was championed by a strong coalition of multiple supporters including the National Marine Manufacturers Association, the Congressional Sportsmen’s Foundation, and the American Sportfishing Association (ASA). Their advocacy effort was bolstered by congressional district-specific economic impact insight obtained by the ASA and Southwick Associates using IMPLAN.

The full impact report breaks the economic contribution of their efforts down to the state and individual congressional district levels. The insight gained from their IMPLAN analysis highlighted the fact that recreational fishing supports jobs in every state and Congressional district in the nation. Handouts spotlighting the economic contribution of their industry for every member of Congress were made accessible on the ASA website. The example below was generated for Rep. Rob Wittman from Virginia’s 1st District—a noted supporter of the bill. The detailed data and visualizations combined with the overall efforts of the coalition led to significant bipartisan support of the Modern Fish Act and its ultimate passage. 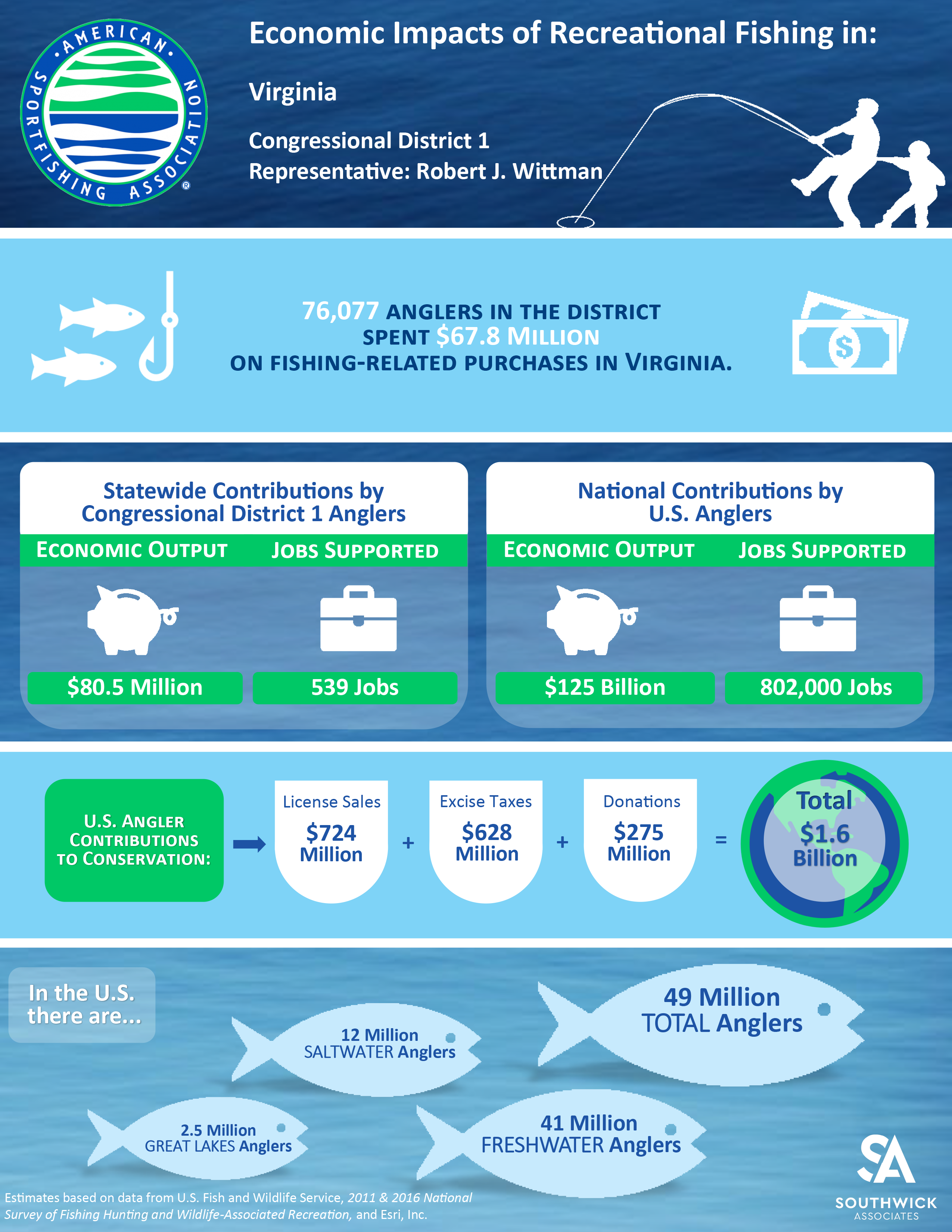 The Alliance for Automotive Innovation (AAI) (formerly the Auto Alliance) touts, “America’s automobile industry is one of the most powerful engines driving the US economy.” The overarching automobile industry encompasses vehicle and part manufacturing, parts suppliers, and dealers. Automobile manufacturers employ skilled workers in all 50 states. The auto industry is often a talking point for legislators, so quantifying the impact of their industry effort was critical to ultimately craft stakeholder messaging.

With this in mind, the AAI completed a contribution analysis of automotive manufacturing, selling, repairing, renting, and additional maintenance services using IMPLAN. The results provided the total jobs supported across industries, tax revenue generated, and labor income. This data was then presented on the AAI website as an interactive map. Because of the granularity of the data found in IMPLAN, the map is sortable by state and congressional district and provides quick effective insight to communicate the value of the auto industry.

Associations and advocacy groups are leveraging the granular economic detail found in IMPLAN to affect change. IMPLAN’s economic impact data for 546 industries across 50 states and 435 Congressional districts empowers you to mobilize your membership with data and Amplify Your Advocacy by delivering impactful insight that communicates your value and resonates with elected officials.

Request a Consultation today to see how IMPLAN can help bolster your advocacy efforts.